My Top 10 (Kick-butt) Men of Sci-Fi and Fantasy

Posted on July 30, 2014May 1, 2019 by Kylie Fennell
When it comes to inspiration for characters in my fiction writing I often look to my favourite films and TV shows.
From loveable larrikins to bad-guys-turned-good and comical side-kicks, here are my top 10 male stars of fantasy and science-fiction. Whether they are from the 70s, 80s, 90s or even more recent, these guys kick some serious butt on the big and small screen.
1. Jareth, The Labyrinth 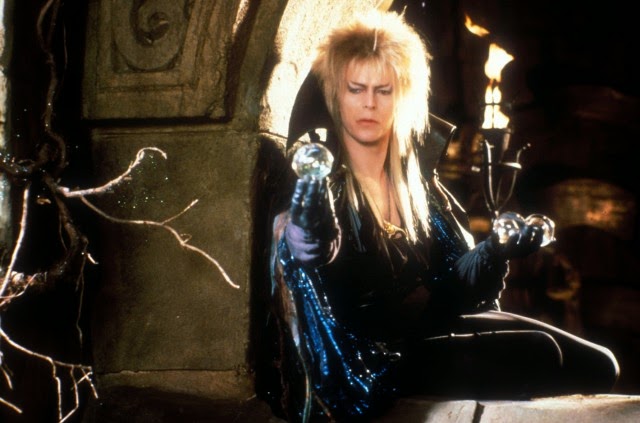 David Bowie as Jareth, the Goblin King, in the 1986 movie Labyrinth delivers a triple whammy of enviable 80s hair, glam-rock make-up and a killer wardrobe dominated by patent leather and over-the-top ruffle shirts – picture Mr Darcy meets Liberace.
Added to that he sings a few tunes and delivers villainous (but dare I say downright sexy) lines like: Just fear me, love me, do as I say, and I will be your slave!
It’s not hard to fall under this antagonist’s spell.
2. Madmartigan, Willow 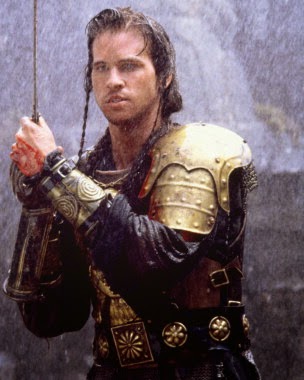 Val Kilmer as Madmartigan in Willow is a boasting mercenary swordsman, who helps the main character Willow on his quest to protect a child from an evil queen.
He is reckless, disgraced, dishevelled and completely self-obsessed for the most part, but glimpses of good are seen as he joins Willow’s quest. He becomes smitten by a fairy spell and declares his love for a woman who he utterly detests after she attacked him.
His devastatingly romantic declaration goes like this:
Madmartigan: You are my sun! My moon! My starlit sky. Without you I dwell in darkness. I love you! Your power has enchanted me, I stand helpless against it. Come to me, now. Tonight, let me worship you in my arms. I love you!
Sorsha: Stop saying that!
Madmartigan: How can I stop the beating of my heart? It pounds like never before.
Sorsha: Out of fear!
Madmartigan: Out of love!
Sorsha: I can stop it. I’ll kill you.
Madmartigan: Death, next to love is a trivial thing. Your touch is worth 100,000 deaths.
He has no recollection of his love declaration and when questioned cries out in complete disgust and shock: ‘I don’t love her, she kicked me in the face!’
3. The Man in Black, The Princes Bride
Cary Elwes as Westley/Dread Pirate Roberts/The Man In Black, a farmboy, a pirate in black, and (Princess) Buttercup’s love interest. 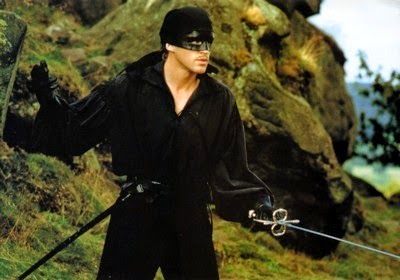 For most of the movie he wears a mask, delivering witty one-liners and overwhelming his enemies with charm, intellect and deft swordsmanship.
His only quest is to return to his beloved Buttercup and do whatever she bids. His frustratingly concise and infamous response to anything Buttercup asks of him is: ‘As you wish’.
4. Inigo Montoya, The Princess Bride
Mandy Patinkin as Inigo Montoya, is a Spaniard who has trained in fencing for 20 years to the point of fighting left-handed so as to prolong his duels. He seeks revenge upon Count Rugen for the murder of his father. 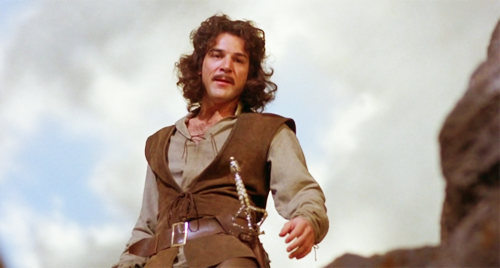 Seriously wounded early in the battle, he is able to restore his focus by repeatedly reciting his long-rehearsed greeting of vengeance: ‘Hello, my name is Inigo Montoya. You killed my father. Prepare to die.’ He eventually slays his nemesis.
5. Han Solo, Star Wars 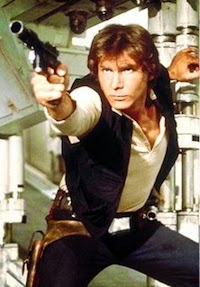 Harrison Ford plays Han Solo who is described as a reckless smuggler with a sarcastic wit.
During the course of the Star Wars story, he becomes a chief figure in the Alliance and succeeding galactic governments.
Star Wars creator George Lucas described the character as ‘a loner who realises the importance of being part of a group and helping for the common good’.
No one can do cool like Han Solo. This cheeky character came back to life after being frozen in a large block of carbonite in The Empire Strikes.
His love-hate relationship with Princess Leia is the clincher for me:
‘Look, I ain’t in this for your revolution, and I’m not in it for you, princess. I expect to be well paid. I’m in it for the money’.
6. Yoda, Star Wars
So he is a little green puppet that speaks in riddles and breaks all the rules of English grammar, but this little dude can fight and his words of wisdom are seriously deep. 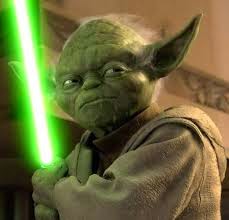 Grand Jedi Master Yoda is among the oldest and most powerful known Jedi Masters in the Star Wars universe and trains Luke Skywalker to fight against the evil Galactic Empire.
His philosophical oneliners include:
“Fear is the path to the dark side. Fear leads to anger. Anger leads to hate. Hate leads to suffering.”
“Powerful you have become, the dark side I sense in you.”
7. Aragorn, The Lord of the Rings 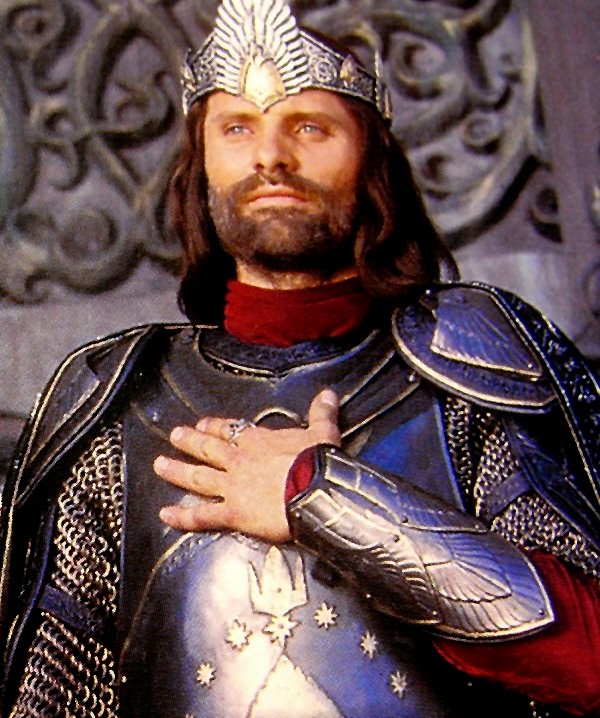 Viggo Mortensen as Aragorn in The Lord of the Rings is devastatingly dark and mysterious. Aragorn was a Ranger of the North, first introduced with the name Strider.
Strider is surrounded by mystery and it is unclear initially whether he is friend or foe.
Not only does it turn out he is a friend, he is a powerful ally who protects the hobbits to the very last. It transpires he is the heir of Isildur and rightful claimant to the thrones of Arnor and Gondor and is an integral to the quest to destroy the One Ring and defeat the Dark Lord Sauron.
When he is returned to his rightful throne he instructs the four Hobbits of the Fellowship: ‘My friends… you bow to no one.’
Fiercely loyal and brave, as well as humble, what’s not to love.
8. Legolas, The Lord of the Rings 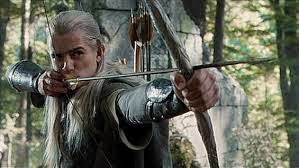 Orlando Bloom (with gorgeous long blonde hair) plays Legolas Greenleaf, an Elf and son of the Elf-king Thranduil of Mirkwood. He is a Prince of the Woodland Realm (Mirkwood), a messenger, and a master bowman.
There’s something truly magical about this elf’s skills with a bow and his unlikely friendship with the dwarf Gimli gives you warm and fuzzies.
‘Come, you shall sit beside me, friend Gimli, then all will be well, and you need neither borrow a horse nor be troubled by one.’
9. Pippin and Merry, The Lord of the Rings
Merry and Pippin are two characters from The Lord of the Rings series, played by Billy Boyd and Dominic Monaghan. 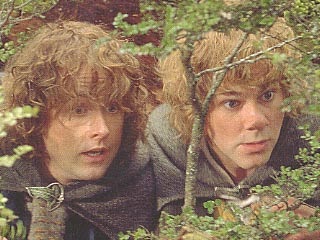 This dynamic duo are loveable, loyal, brave, mischievous and the most unlikely heroes who set forth on a big adventure and search for second breakfasts. They promise and deliver many comic moments in this blockbuster.
Aragorn: Gentlemen, we do not stop till nightfall.
Pippin: What about breakfast?
Aragorn: You’ve already had it.
Pippin: We’ve had one, yes. What about second breakfast?
Merry: I don’t think he knows about second breakfast, Pip.
Pippin: What about elevenses? Luncheon? Afternoon tea? Dinner? Supper? He knows about them, doesn’t he?
Merry: I wouldn’t count on it.
10. Jean Luc Picard, Star Trek: The Next Generation
I wanted to round off my Top 10 with a star from the small screen. When it comes to uber-cool one-liners and almost inexplicable sex appeal, nothing beats Patrick Stewart as Jean Luc Picard in Star Trek: The Next Generation. 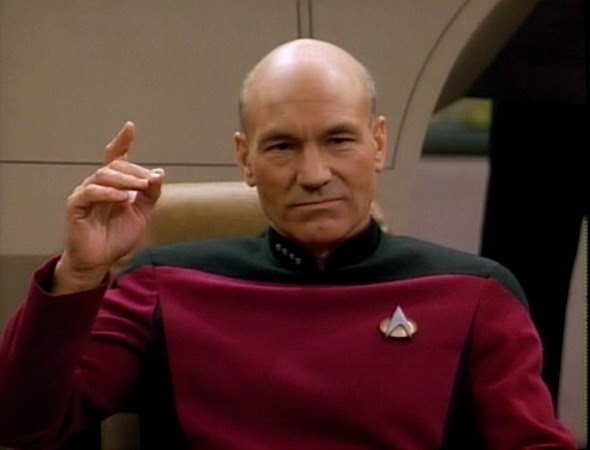 Stewart himself is reported to have been uncertain as to why the producers would cast ‘a middle-aged bald English Shakespearean actor’ as captain of the Enterprise, but no one could question the impressive figure he made on the Bridge.
His character has been described as deeply moral, highly logical and intelligent.
Picard is a master of diplomacy capable of remarkable tactical cunning in tricky situations.
His signature order is: ‘Make it so’. Anyone who doesn’t look for opportunities to drop this phrase in everyday conversation, needs to get themselves to Blockbuster immediately and watch this series as a matter of grave importance.
Who is on your Top 10?
Check out my related blog post featuring my Top 10 Women of Sci-Fi and Fantasy.
***UPDATE*** This list wouldn’t be complete without my favourite anti-hero of all time, Loki. So let’s consider it a top 11. 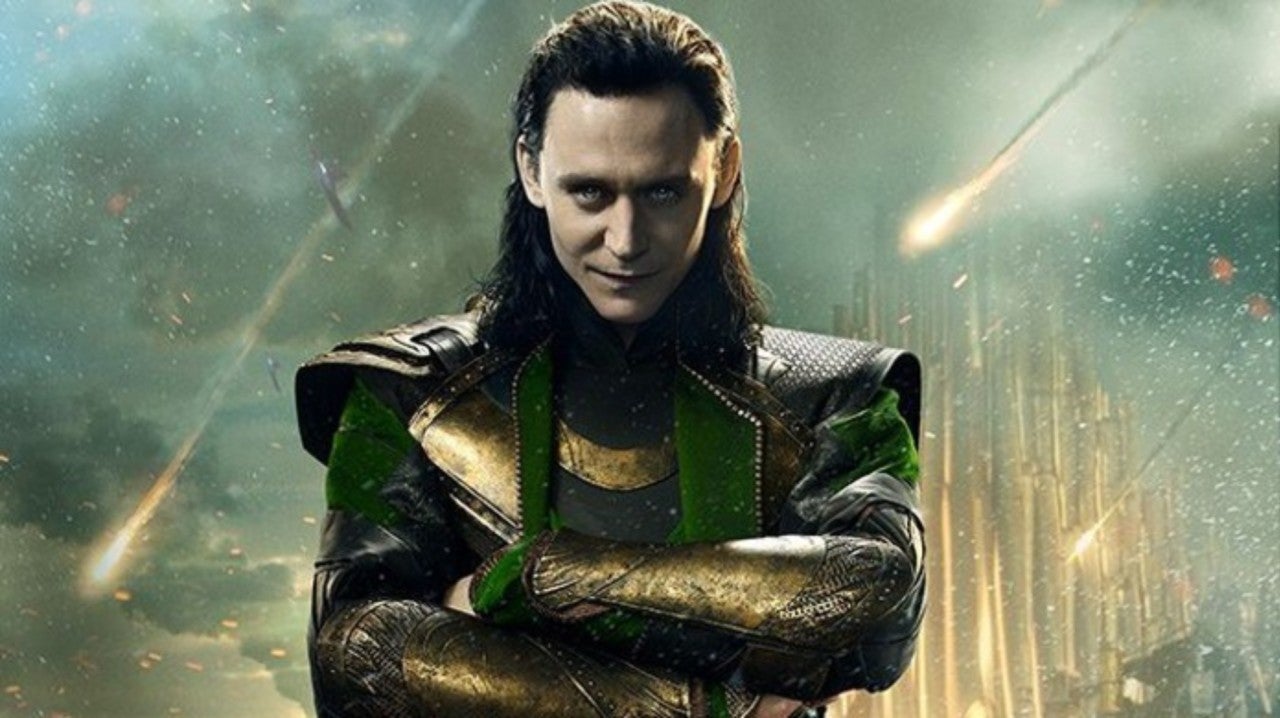